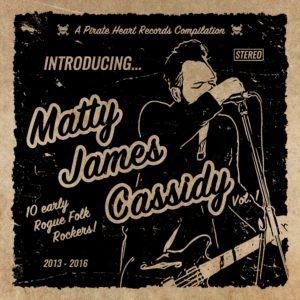 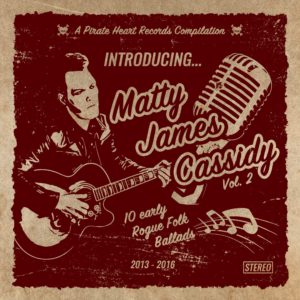 Probably more identifiable to Rockfiend readers as the bass player in Tyla’s Dogs D’Amour, Matty James Cassidy is also a talented singer/songwriter in his own right with two high quality studio albums of original material, well beyond his years, under his belt. While this output may be under the radar of many fans of more traditional rock music, the reviews on his website speak for themselves and demonstrate how well his work has been received by those who have gotten acquainted with his individual style.

Straddling musical genres his music defies categorisation or easy description. Originally hailing from Northern Ireland, his music is passionate, raw, rowdy and heartfelt. Predominantly acoustic folk/rock-based, but with outlaw country, rockabilly and Celtic influences simmering beneath the surface and fighting for attention you can be guaranteed of an interesting listen. Displaying the traits of a modern-day troubadour, travelling from town to town armed mostly with an acoustic guitar and a collection of songs with choruses most others could only wish they had written, Matty James Cassidy has much in common with his Dogs’ band leader Tyla. In addition to now being an established member of Tyla’s Dogs D’Amour (and the Tyla J. Pallas Band before that), he can also regularly be found accompanying Tyla at acoustic gigs on bass and backing vocals, while good-naturedly providing the foil for Tyla’s banter.

‘Introducing Matty James Cassidy’ provides in the main a 4-year retrospective (2013-16) of 20 songs spread over two volumes split into Rogue Folk Rockers and Rogue Folk Ballads. In the words of the TV advert “it does what it says on the tin”. Volume 1, as the title suggests, is the rockier of the two releases and yes, you’ve guessed it, Volume 2 is the more romantic and heartfelt. Songs for different moods anyone?

Both volumes include highlights from his two studio albums ‘Last One to Die’ (2014) and ‘The Road to No Town’ (2016), providing a great introduction for new listeners. And for the completists amongst us the collection also contains four previously unreleased songs.

Volume 1 opens and closes with unreleased tracks. Kicking off with ‘A World Away’, a much rockier electric version of an acoustic track previously only available on the earlier ‘Cut to the Bone’ sampler, and closing with a characteristically and furiously strummed ‘Growing Up The Long Way’ (an outtake from ‘The Road to No Town’ sessions) in which I swear I could hear an Elvis lip curl. In between, if existing fans needed any reminder or any new listeners needed any encouragement, ‘Sticks & Stones’, ‘Dissatisfied’, ‘Up In Smoke’ and ‘Same Old Me (Brand New You)’ provide examples of the type of song which have you singing along with the choruses before you even know the words. Having seen Matty perform a few of these songs live, these are songs which take on a life of their own in a live setting and become communal sing-alongs.

As strong as Volume 1 is, Volume 2 is more reflective, will strip down your barriers and form an instant emotional connection with your heart and soul – whether you want it to or not, so be prepared. Opening with the unreleased ‘State of Mind’ (written while Matty was still at school), the collection of Rogue Folk Ballads is unashamedly heartfelt and emotional and every bit as sing-a-long-able (I don’t care if that’s not a word, I’ll take it). Mama’s Boys’ Pat McManus makes an appearance on a couple of tracks including contributing some beautiful fiddle work on the Celtic-tinged ‘Cut With Dust’. ‘By the Cold Light of Night’, with it’s shuffling swing is almost impossible to sit still to. And as we approach the end of 2019, I think I’d be hard placed to think of another album released this year, with such an inspired running order as the 3 song run of ‘Heavy Heart’, ‘This One’s For …’ and ‘Don’t Turn Your Light Out on Me’. While I’ve heard these songs before on different albums, there’s something about the way they follow each other that unexpectedly, but really, really works. As with Vol 1, this volume also closes with another unreleased track – ‘How to Believe’ (an outtake from the ‘Last One to Die’ sessions). Unreleased yes, but with the feel of a song you’ve known all your life.

If I was ever in any doubt before about what a Rogue Folk Ballad is, I’m not now. Truly beautiful music and sentiment designed to be sung, and drunk, along with.

Okay, I’m biased. As much as I love rock music in it’s many loud, cranked up forms, for me nothing showcases the quality of a well-written song like hearing it in a raw and passionate acoustic form (the form in which many electric rock classics were themselves first conceived). If you like your music intelligent, raw, emotional, passionate and designed to be sung along with at the top of your voice, buy these two volumes. Simples.

A World Away
The Road to No Town
Better Days
Sticks & Stones
Last One to Die
Dissatisfied
Up in Smoke
Gunpowder
Same Old Me (Brand New You)
10. Growing Up the Long Way